Founder Herb Link was an extraordinary man who lived an extraordinary life filled with what mattered to him most – people. He was a man who enjoyed undertaking new challenges in life and in 1966 he started Westwood Memorials from his home in Kirkfield Park in Winnipeg, Manitoba. On March 15, 1967, with six markers and three memorials, Herb moved Westwood Memorials to its present location in West St. Paul, Manitoba. Herb and his wife Blanche set up office and a showroom in the front of their home while they made a small workshop out of an old garage in the back. It was small but it was a family business that Herb and his wife took great pride in.

As the years went by the business grew and so did their family. Over the next few years Herb and Blanche had three children: Jennifer, Curtis and Heather. Over the years, Herb noticed his young son Curtis, had a real eye for detail. So after school and even on Saturdays, Curtis studied the ways of the memorial industry by learning to sandblast and shape carve granite. Curtis later studied with a veteran to the memorial industry Gus Schwartz, a man whose old weathered hands had over 50 years of experience cutting, grinding, chiseling and polishing granite and other types of stone. Curtis saw first-hand how the beauty of granite was revealed under this master's hands and was able to adopt and learn all his techniques.

Westwood Memorials was a thriving success but in 2002 the family was deeply saddened when Herb Link passed away. It was now time for Curtis to step forward and walk in his father’s footsteps, fulfilling his father’s dreams but also creating some of his own. Curtis saw that the business was growing by leaps and bounds and in 2006 a new building for Westwood Memorials was built. This large new facility housed a beautiful, spacious indoor display/showroom and also has a large production area that would incorporate the latest in computer memorial technology and old world artistry. With the addition of a state of the art industrial laser etcher and computer design Westwood Memorials could now take the most beautiful photographs, scenes and memories and etch them realistically forever into granite.

Computer technology does not replace but builds on the old world skills of stone carving that have graced memorials throughout the decades. Each area of artistry is beautiful on its own, but the two combined can now capture memories or a thought that will endure for all of time. New technology, old world carving, artistry and deep pride in what we do will produce a monument that stands out from the rest.

Finding what works for you is what we pride ourselves in. Our office staff and artists are here to help you create that everlasting tribute to your loved one. Please do not hesitate to call or drop in when the time is right. 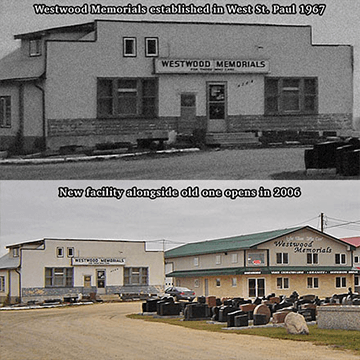 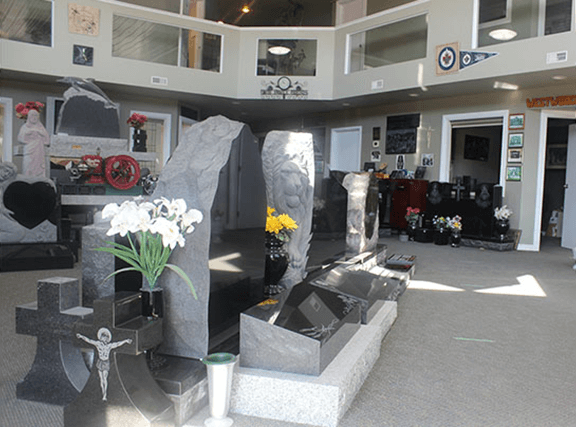 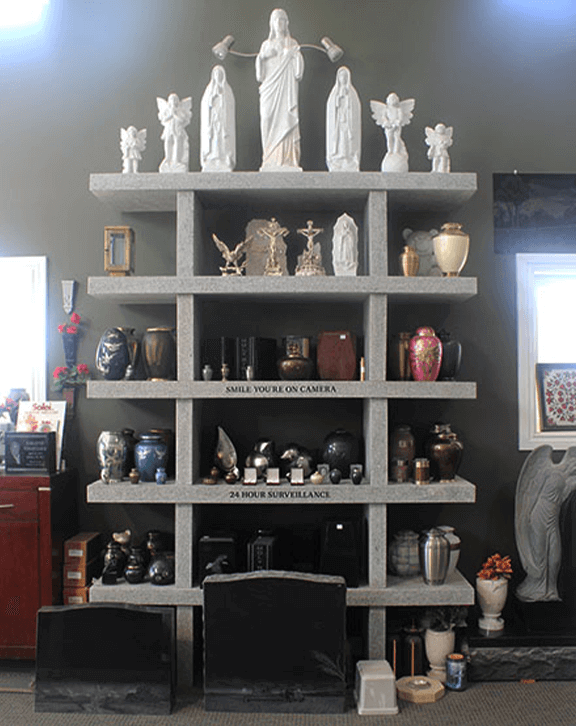 Choosing a memorial for you and your family is an important, personal decision. You can choose from the examples offered here, or, one of our professional memorial counselors will assist you in determining the most appropriate form of memorialization for your family.
Please consider us at your service
Watch our latest video 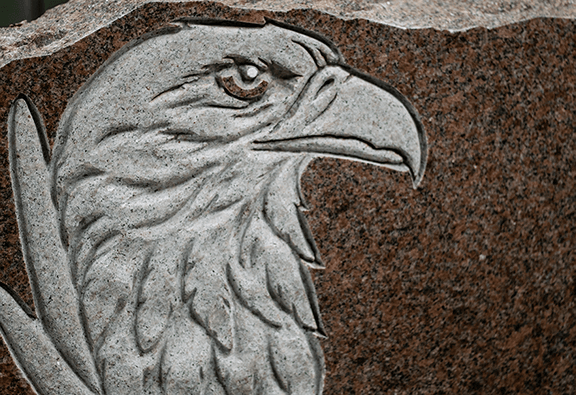 Our caregivers are trained specifically to provide the best memorial service. 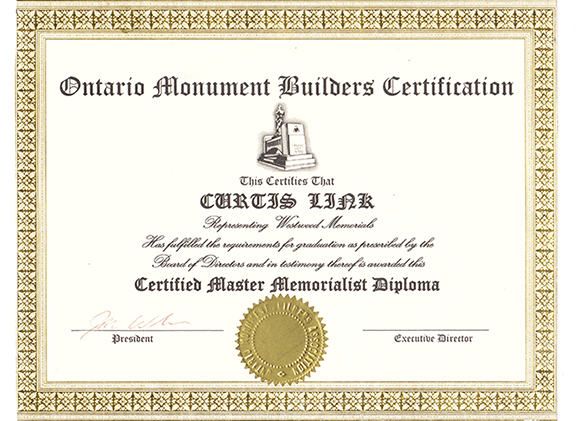 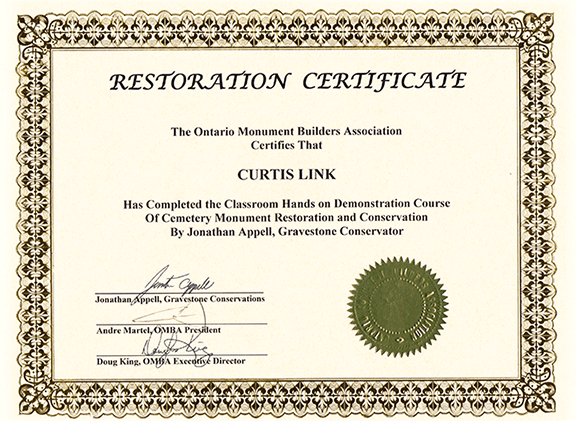 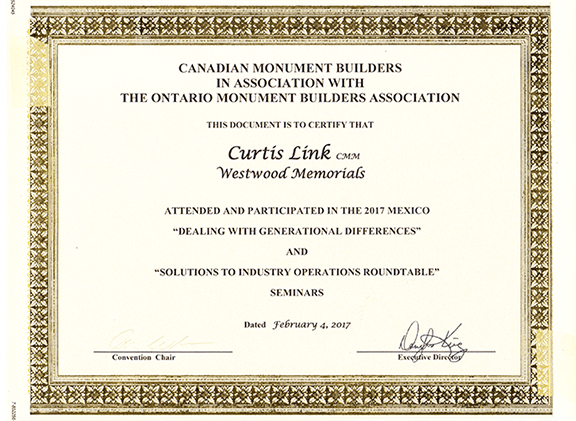 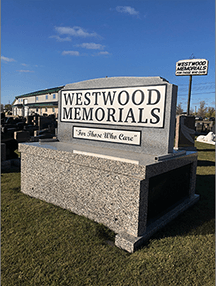 We are keeping your memories of loved ones alive.
We measure our success by the quality we deliver, the relationships we build and the understanding we extend to every customer. Our services give families, friends and communities a lasting tributes to the lives and memories of their loved ones. Every Westwood product is custom designed and built to last forever and reflect your preferences, standards, heritage and traditions.

Meet our team of talented and caring professionals. Just like every memorial we create, they are unique, and each has a different story..... 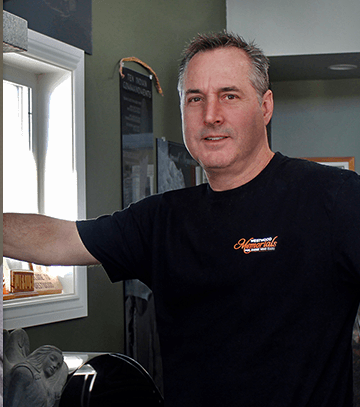 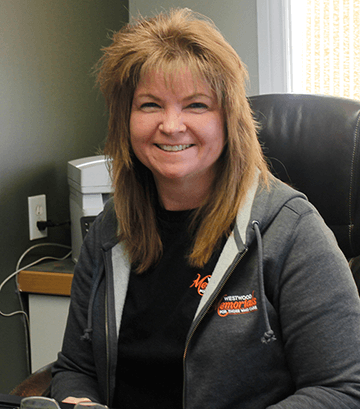 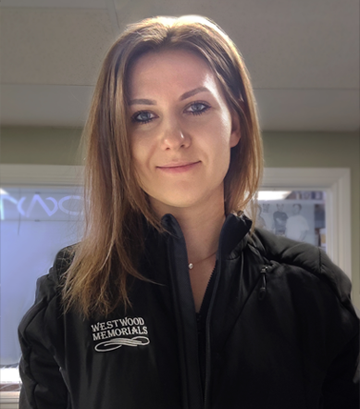 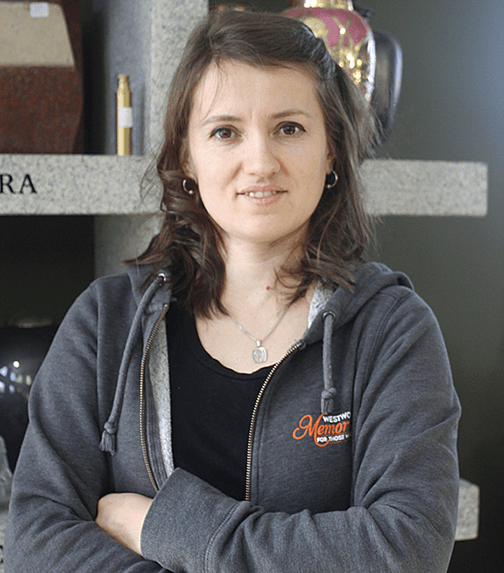 What Our Clients Says

Kazimiera Memorial
Thank you so much for engraving our Mom’s (Kazimiera’s) headstone in time for the funeral back in May. She would have been so happy to know she was one of your “preferred” customers. Cheers!

Thank you Westwood Memorials team. Our mother's marker is beautifully designed. You listened and we could not be more pleased with the results. Brenda Waller & Rodger Schultz

Dear Westwood Memoprials
I am so thankful and grateful for all your help with Mom and Dad's memorial stone. I'm still amazed at how you took what I thought was a daunting project and made it flow seamlessly. I will always appreciate and never forget your great kindness and thoughtfulness and your helpful expertise that you showed… second to none I'm sure. The stone is just beautiful… the craftsmanship is truly profound and is a statement unto Itself… truly a work of art. Should the situation arise, I will, undoubtedly, highly recommend your company to others. Again, I thank you from the bottom of my heart for all that you have done for me. Keep doing what you're doing and God will continue to bless you. Most sincerely, Aileen Olafson

Dear Westwood Memorials Team
We so appreciate everything you've done for us. You figured out exactly what we wanted and are very gratful for how our mom is now memorilized.